We Interrupt Our Regularly Scheduled Program to Bring You ... Good Writing

There's nothing worse than an outdated blog, and mine has been growing stale for so long now, it might as well be covered in mold. While I'd like to tell you I've been busy traveling the world or doing something equally as exotic, the truth is ... well ... OK, I'll just say it: General Hospital has kinda sucked lately. And while I'm a long-time, loyal viewer who sticks by the show through good times and bad, the past several weeks have left me completely unentertained and uninspired. One week, I barely even watched any of the episodes, something that usually only happens if I'm away on vacation. But with so much good TV available to me on my overpriced cable package, I couldn't see carving out time to watch most of General Hospital fly by my screen on fast-forward.

There have been some glimmers of hope. I am a die-hard Sonny and Brenda fan from back in the 1990s, and while I have been mostly disappointed with how the writers have handled Brenda's return thus far, I absolutely loved S&B's scenes this past week in their old apartment. I've also enjoyed Lucky and Siobhan's scenes lately (is it just me, or does Lucky look sexier ever since he started gettin' some?) and I like watching Liz get her panties in a twist over it. And even though I thought it was absurd that Sam shipped Michael off to a hotel room with a woman who was willing to take money in exchange for having sex with a tortured 18-year-old virgin, I like the dynamic between Michael and Abby so far.

Sadly though, the General Hospital episodes that I've enjoyed the most in the past few months are the ones that have been repeats, from the Brenda-focused ones that replayed leading up to her return to this past Friday's Jason Morgan marathon on SoapNet. Yes, I'm sure some of the enjoyment of those episodes is the nostalgia factor--remembering when I first watched those stories play out, seeing characters that are no longer on the show, and seeing how those who still are on the show have changed over the years (skinny Jason! Luke with hair! when Nikolas was hot!)

New Poll! What Would You Like to See Permanently Banned From General Hospital?

I've posted a new poll here at the Nurses Station (in the upper right-hand corner of the site)--What would you like to see permanently banned from General Hospital?--and I thought I'd break down the choices for you in case you're having trouble deciding. Also, feel free to expand on your choice, or suggest a choice I may have overlooked, in the comments section.

Suzanne's Cleavage
When Brenda's assistant Suzanne arrived on General Hospital, well, she came baring gifts (see what I did there?). Now, wherever she goes--Rome, Port Charles--it's a sure bet that her overexposed cleavage will be leading the way. Suzanne is an attractive woman, but she's doing herself a disservice with this far-from-flattering look day in and day out. It also doesn't help that she appears to have gotten a really bad sunburn on her chest and forgotten to moisturize afterwards--the words wrinkled, discolored and blotchy come to mind. Plus, if her tops' necklines get any lower, GH is going to have to move over to cable. 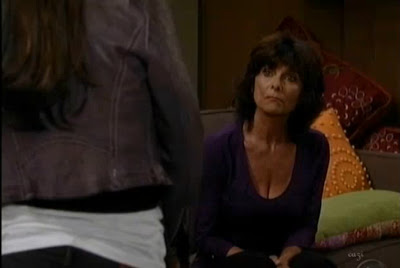 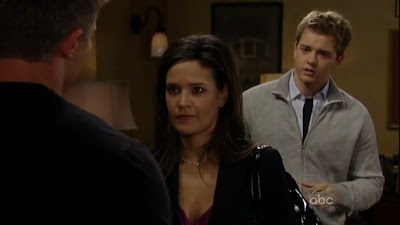 Boy, did I pick the wrong day to set time aside for a GH recap. Even with two major characters returning to the Chuckles, there was very little in the way of action--unless you consider Max and Milo groping each other on Jason's couch as "action." (More on that later.)

Oh Claire, bitter does not look good on you, girl. Dumped by Sonny faster than you can say "what woman in Port Charles hasn't he taken to the island," she's channeling her hurt feelings back into that whole "I'm going to put Sonny away for life" nonsense. Yawn. Because that worked out so well the first time you tried it. And we all know, Claire, that you're just a homemade pasta dinner and a silk robe away from crying "conflict of interest" to your superiors again. But after finding Michael in Sonny's office, she threatens to report the parole violation and send Michael back to Pentonville. Ah yes, the infamous Judge Carroll and his terms of parole still loom large.

Like Giving Candy to a Baby: Thoughts on Hooker-gate

After watching both Monday's and Tuesday's episodes of General Hospital last night, and following related conversations on Twitter, I had to include my two cents on the Michael-hooker story line. I'm not going to comment on the morality of prostitution—that's for you to decide—but I would like to comment on the quality of the storytelling.

Michael has been dealing with episodes of severe trauma since birth. In the last couple years alone, he has been shot in the head; miraculously woken up from a coma, but with serious brain damage; subsequently dealt with issues of rage that has resulted in verbal and physical violence; killed his stepmother; and been sent to prison. And yes, the prison rape that has not been formally mentioned, but that Jason seems well aware of. If anyone on God's green earth needs a therapist, is it not Michael? On a show that rushes women into Shadybrook on the reg, why has this child not even sat down with a counselor?

Even more perplexing, his loved ones lined up in court to plead with Judge Carroll to sentence Michael to "counseling and community service" instead of prison. When he was released from prison, he was given the community service as well as the added bonus of having to live with Dante and never seeing his father, Sonny. Um, where's the counseling, people?

I always joke that GH viewing requires one to check their grasp of reality at the door, but this "Michael wants a hooker" story line that is now playing out confounds me in all sorts of ways. First, after all the shouting of "He needs counseling, not prison!" why doesn't counseling now even cross Jason or Sam's minds? Sam did say that Michael's "not ready" to talk to a counselor ... yet he's ready for a paid sexual experience? I just don't understand how in a matter of two episodes, this poor, disturbed kid has been rushed into a hotel room by two influential adults in his life with an obviously much older stranger named Candy (er, Abigail) who has accepted money to have sex with him.

If counseling is somehow not in the realm of possibility, why didn't Sam or Jason suggest that perhaps Michael is not ready to be involved with girls on any level at this point in his life until he gets some kind of hold on his demons? I love Michael, and I sympathize with him--and I like this blonde friend of Kristina's that he's becoming involved with (I forget her name, so I'll call her Party Girl ... because "Party Girl Who Has a Friend Who DJs" was too long)--but it disturbs me that he's verbally attacked Party Girl at least twice now and yet they're still pursuing each other. I can't help but think that poor Party Girl shouldn't put up with a guy speaking to/yelling at her that way, regardless of his tragic back story. Oh, and when I last left Michael at the end of Tuesday's episode, he was physically attacking Candy-Abby. Attacking women is not the way one works through their issues, GH.

Also nonsensical ... Everyone is soooo worried that the least little thing will get Michael shipped back off to Pentonville. The last I checked, prostitution is illegal, and Port Charles is not Vegas or Amsterdam. So why didn't anyone mention to Michael that if he got caught paying for sex, he surely would get shipped back to Pentonville faster than Sonny dumped Claire Walsh? That seems to be a major flaw in the storytelling. God forbid you have a conversation with your father or you'll get sent back to prison, yet please feel free to engage in a blatantly illegal act.

So on today's GH ... Michael does an internship at a meth lab! I kid, but really ... would it make any less sense than what's been playing out these last two days?

What do you think?

Kleenex, my fellow GHers. Lots and lots of Kleenex. That's how I got through today's Robin and Stone scenes. It was all kinds of emotional and heart wrenching and nostalgic. And sweet bajeezus, if Michael Sutton doesn't look even hotter than he did in the 90s.

Let's just take a moment to bask in the Stone-ness of it all, shall we?
﻿ ﻿ ﻿ ﻿ I particularly loved when he told Robin at the end, "That's why I'm here. Because I'm part of you." 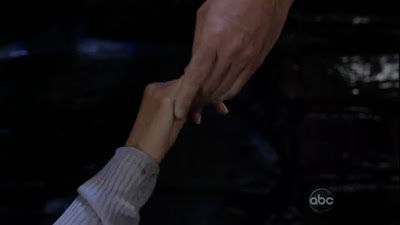 One for the (Stone) Ages

﻿ ﻿STONE!! He was only on for a minute or two at the end of today's episode, but I'm still freaking out like Brooklynn on a private jet to France. Honestly, I don't know if I can compose myself long enough to say anything other than ... STONE!!! I loved this character beyond words and even if he's only a vision at the bottom of a well, I am so flippin' happy he's back on GH. By the way, I barely recognized Stone 2010 without the long hair and denim vest ...

While Robin is entertaining one very hot figment of her imagination down in that well, the rest of Port Charles is in a mad scramble to find her. Since when are Steve and Patrick experts in criminal psychology? Because they've taken it upon themselves to devise a little scheme to wear Lisa down enough that she'll spill where Robin is. It's a bit of a good cop-bad cop routine where Steve acts concerned for Robin and Patrick acts like she must have just taken off like she did when she had post-partum depression. Hmm. More like Keystone Cops.

Read more »
Posted by Dawn Decker at 9:24 PM No comments:

Random Thoughts on the Past Few Weeks of General Hospital

So I haven't written a General Hospital recap in about two or three weeks now. Blame it on an especially hectic work schedule and the worst allergies I've had in years. By the time I get home, I have just enough energy to lay on the couch and catch up on that day's GH. Basically, The Nurses Station needs a nurse! Or something stronger than this pricey box of Claritan.

But even through the haze of this sinus headache and congestion, I've managed to put together some thoughts on the latest goings-on on my favorite soap. And since I miss my blog, and especially my blog friends, I thought I'd share them with you:

Which of the following would you like to see permanently banned from General Hospital?